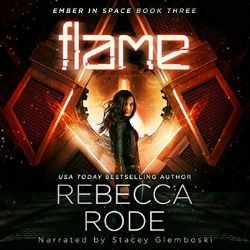 Two flares.
Only one will claim victory.

Ember has thrown the empire into upheaval. The entire realm knows her face, and her name is whispered in alleys and in the underground. Everyone wants to know what she'll do next, because it's clear she's the only person alive who can challenge their new, strangely powerful emperor. A massive battle is inevitable--and the entire realm is taking sides.

There's just one problem. Every time Ember uses her power, she loses a piece of herself. Fighting the emperor could cost her very soul.

Meanwhile, Stefan worries that Ember is slipping away from him. As she grows erratic and unpredictable, he's torn between his love for her and his desire to protect the revolutionaries. Can Stefan save the woman he loves? And can Ember fulfill the prophecy written in the stars before she loses herself completely?