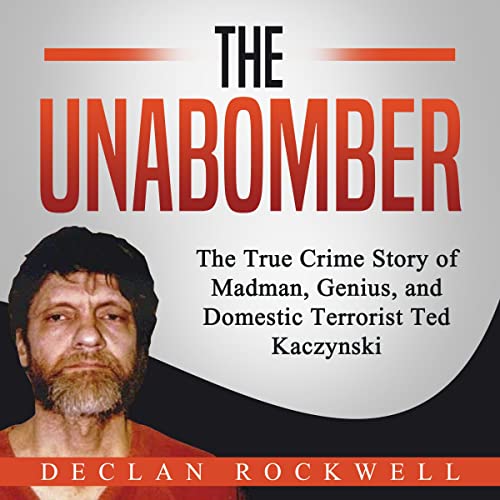 Step into the disturbing real-life story of the Unabomber and the 20-year manhunt to catch him.

As a fascinating and deeply chilling example of what happens when genius goes wrong, the life of Ted Kaczynski stands as a disturbing testament to madness, murder, and a mind pushed to the brink. Now, this eye-opening biography retraces the nearly 20-year manhunt that bewildered the FBI’s greatest investigators, along with the series of life-changing events that motivated the Unabomber’s war against society.

Unravelling the childhood and adolescent years of Ted Kaczynski, his gradual withdrawal from society, and the increasingly ominous ideas that transformed this once-bright student into a vengeful recluse, this true crime story paints a riveting picture of Ted’s life and psychology, shedding light on what motivated him to become the Unabomber and unleash his wrath on the world.

As a gripping listen that’s perfect for true crime fans, students, and the morbidly curious, The Unabomber: The True Crime Story of Madman, Genius, and Domestic Terrorist Ted Kaczynski explores the terrifying reality of a genius mind turned evil, exposing his personal crusade against technology - and his willingness to use terrorism against those he viewed as responsible.