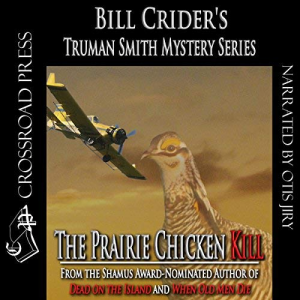 In this enjoyable fourth series entry, Galveston PI Truman Smith (When Old Men Die, 1994) is hired by Lance Garrison, his still unpleasant but now rich high-school classmate, to investigate the shooting of a prairie chicken (really a kind of grouse) on Garrison's federally protected land in Picketville, Tex. Smith reluctantly agrees, largely because his high-school sweetheart, Anne Lindeman, now lives in Picketville. A prime suspect is Ralph Evans, an antigovernment local talk-radio host who declares his concern for endangered species by advertising Spotted Owl in a Can.

When Smith and Anne's father-in-law, Red Lindeman, explore the scene of the crime, a sniper in a crop duster opens fire on them - a "fly-by shooting", Smith calls it. Then Anne's husband, manager of the radio station, is shotgunned to death. Police chief Ward Peavy eventually charges local birdwatcher Martin York.

When Smith discovers that a previous prisoner died in Peavy's jail, the big picture takes shape. Truman Smith would rather laze in his lawn chair, sipping Big Red and reading Tobacco Road, but when he gets on a case, he's methodical. So's Crider, who fashions a tight plot filled with laconic charm and idiosyncratic characters.

If y'all are lookin' for a real fine read, Crider's your man. He writes one mean murder mystery, and his walkin' tall hero, Truman Smith, is as smart and as tough as they come. Plus Crider knows just how that East Texas good-ol'-boy talk sounds. This time out, Truman gets suckered into one of the craziest cases of all time. Lance Garrison, someone Tru went to high school with and didn't much like, wants Tru to investigate the death of a prairie chicken. Yep, that's right. A bird. But a rare, exotic bird. Lance thinks there's some government plot or maybe a loony-toons nut behind the prairie chicken's death. Tru agrees to investigate, partly for the $500-a-day fee and partly because he'll be in close proximity to Anne Lindemann, the still-beautiful high-school sweetheart who ditched him for Lance years earlier. For pure fun and sheer entertainment, it doesn't get much better than Crider's Tru Smith stories. Highly recommended.