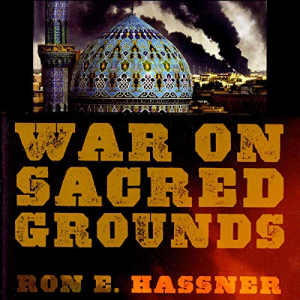 Sacred sites offer believers the possibility of communing with the divine and achieving deeper insight into their faith. Yet their spiritual and cultural importance can lead to competition as religious groups seek to exclude rivals from practicing potentially sacrilegious rituals in the hallowed space and wish to assert their own claims. Holy places thus create the potential for military, theological, or political clashes, not only between competing religious groups but also between religious groups and secular actors.

In War on Sacred Grounds, Ron E. Hassner investigates the causes and properties of conflicts over sites that are both venerated and contested; he also proposes potential means for managing these disputes. Sacred sites, he contends, are particularly prone to conflict because they provide valuable resources for both religious and political actors yet cannot be divided.

The management of conflicts over sacred sites requires cooperation, Hassner suggests, between political leaders interested in promoting conflict resolution and religious leaders who can shape the meaning and value that sacred places hold for believers. Because a reconfiguration of sacred space requires a confluence of political will, religious authority, and a window of opportunity, it is relatively rare. Drawing on the study of religion and the study of politics in equal measure, Hassner's account offers insight into the often-violent dynamics that come into play at the places where religion and politics collide.