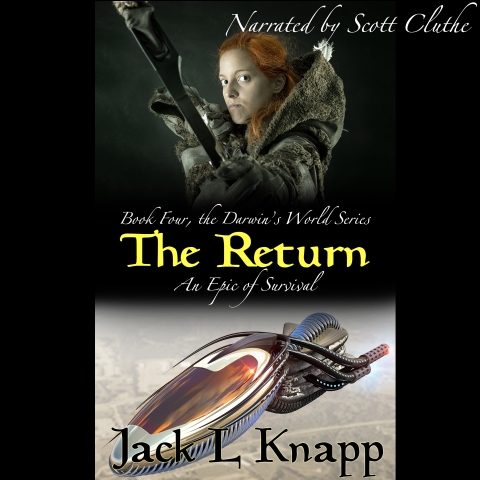 Life on Earth prime is easy - too easy. There are no challenges, virtually no unrealized desires.

People interact largely through personal communicators, a 25th century version that combines the personal computer and the cell phone. Much of the interaction is done through the worldwide semi-sentient computer net known as Central. Prime's population is declining. The primary cause of death is self-termination. Few children are being born.

The futurists, aided by Central, conceive a desperate gamble: retrieve people from the past, from a time when populations were growing. Reconstitute their failing bodies, then winnow out those who might have the qualities Prime needs. Transplant the selected persons to Earth on a parallel dimension, an ice-age version of Earth where humans didn't survive. This is Darwin's World, a world where survival depends on personal qualities and a certain amount of luck. A world of bloody anarchy, where humans are prey, not predator; a world of not only lions and grizzlies but the even large shortfaced bears, sabertooth cats, and packs of calf-size dire wolves.

The plan is to transplant the survivors to Earth Prime, but there's only one problem: They like it on Darwin's World. Some are willing to visit Prime, but they have no desire to remain. Bear, a child born on Darwin's World, has spent years on Prime, educating himself. Task completed, he intends to return to Darwin's World soon. The futurists, a group on Earth Prime who are attempting to reverse Earth's population decline, ask him to escort two of Earth's few children to Darwin's World, where they'll hopefully pick up the qualities that have disappeared from Earth Prime; ambition, curiosity, determination to survive, and hopefully produce children themselves. But...among the helpers are three sisters. Teenagers, Titian-haired triplets - and trouble. Bear is just what they've been looking for! Poor Bear; you just know he's going to have his hands full!