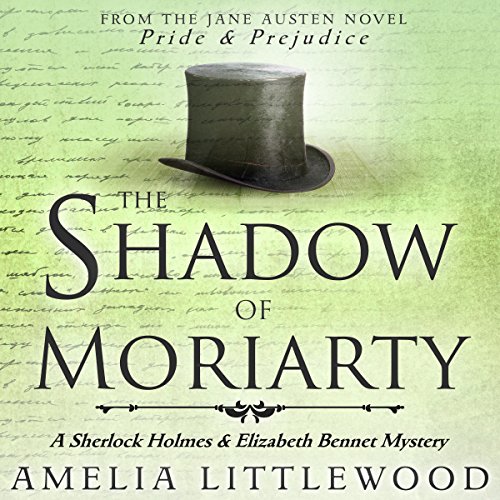 The Shadow of Moriarty: A Sherlock Holmes and Elizabeth Bennet Mystery Book 5

Elizabeth Bennet must face her pride and her prejudices if she is to continue as Holmes's associate detective.

Elizabeth’s mother has made it clear that she does not approve of her daughter’s escapades with Mr. Holmes. With her parents coming to stay in London, Elizabeth’s work might become more difficult. And then there is Mr. Holmes himself, who is realizing that the danger he and his enemies pose to Miss Elizabeth might be more than he’s willing to let her handle.

With Mr. Holmes and Elizabeth on opposite sides of the argument, distraction comes in the form of the lovely young Miss Georgiana. A prize necklace of hers, given to her by her beloved elder brother, has gone missing, and she wishes for it to be found. Since Mr. Holmes has more distracting matters to consider, Elizabeth takes the case, having found a connection with the bright young girl.

And through it all, there is the matter of Dr. Barnabus’s mysterious employer - an enigma going by the name of Moriarty. What does he want with Mr. Holmes? What are his intentions? And can Mr. Holmes and Elizabeth untangle this web before it ensnares them both?