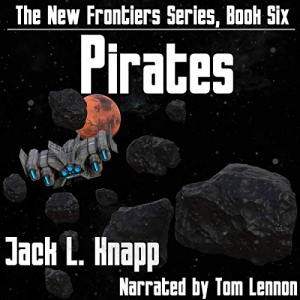 The company has fallen on hard times, in part due to the activities of a bidding cartel on Terra. Sales are down; transportation income is down, and the prospectors can no longer find the valuable metallic asteroids the company depends on. And as always, jealous nations on Terra look toward Mars and plot to take over and stamp out the upstart nation!

The prospectors have become restless, angry with the company. For the moment, they lack a leader, but they’re about to find one. Arguably, the last person any of them would have chosen. But not all will follow him.

Despite everything the Republic has been able to do, a criminal class has emerged. For a time, they preyed on the unsuspecting prospectors, but then they turned to an ancient practice: piracy.

Will the human expansion into space, once so promising, collapse, defeated by a combination of human greed and an old criminal endeavor? Or will Chuck, the former NFI chief executive, be able to work with the prospectors to counter this new threat?

Book 6 in the New Frontiers Series.