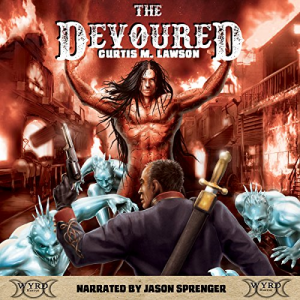 A grim and compelling new vision of The Old West, filtered through Norse and Native American myth. The old man had lost nearly everything- his family, his home, his war. Now, after years of bloody conflict, he must confront a malevolent cosmic entity to save his only son.

Armed with little more than steel and hatred, the old man embarks on a hopeless war against the devouring gods from beyond the stars and their agents on Earth. Leaving a trail of bullets and bodies from Oakland to Omaha, he battles witches, evangelical cannibals, Native shamans, and possessed lawmen.

His final stop: an accursed railroad town where the old man will make a final stand for his son's life against the first amongst the Devourers - the dark titan, Thurs.