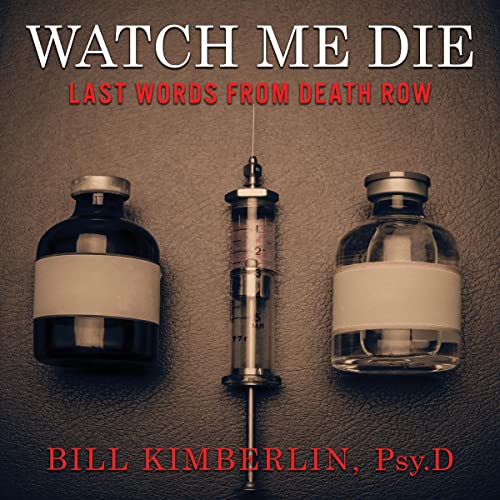 Step inside the death chamber and behind the walls of Ohio’s death row.

Bill Kimberlin, PsyD, invites the listener on an extensive and unbiased journey inside Ohio’s death row in Watch Me Die: Last Words from Death Row.

You will see how these inmates think as Kimberlin not only spends time interviewing them, but also eats meals with them and, in some cases, is the last person to speak with them before they are executed. From the moment they are placed on suicide watch until the moment they are pronounced dead right in front of him, Kimberlin will walk you through the twisted and complex execution process in the state of Ohio.

Watch Me Die presents an unbiased look at the realities of death row, in Ohio and America as a whole. This book is much more than an argument about the death penalty. Instead, Kimberlin exposes the harsh truth of what it is like to be on death row, counting the days until your own execution, as told to him by those who have lived it.

With no physical or mental restraints, Kimberlin’s conversations earn the trust of many high-level and violent offenders. He shares with the reader these unfiltered and honest thoughts from people staring in the face of death. Their writings, their artwork, and their own words will put the reader in the room with these dangerous killers. Nothing is off-limits and there is nothing to shield Kimberlin from the same hands that have taken countless lives, leaving Kimberlin himself asking, “Will this be my last trip to death row?”