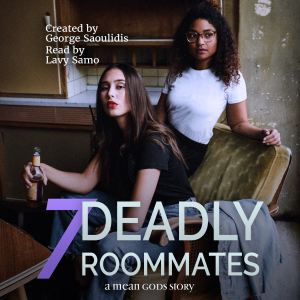 The 7 Deadly Sins, Moving In

When Horace gets fired from his dead-end job, an unexpected lady gives him the courage to stand up for himself. But will he manage to get his life back in order when 7 strange women suddenly burst into his life and his home, when he has agreed to the Terms of Service without having read them and when the game these women are playing ends up in either success or death?

WARNING: “7 Deadly Roommates” contains explicit content, low inhibitions, bilingual cursing, British spelling, European political correctness, a ton of stuff given in the metric system, worship of made-up corporate gods, references to male and female body parts and the myriad of fun ways they link together, drinking, abuse, attempted murder, polyamory, LGBT characters, diversity, representation of all body types, and the story of a guy who's mixed up in a wicked game of sin.