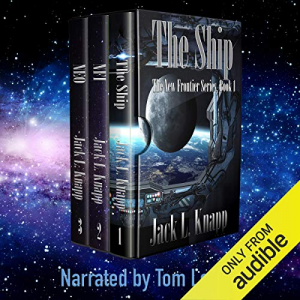 Anyone who is a fan of Isaac Asimov, Arthur C. Clarke, David Weber will love Jack L. Knapp. And they do. Thousands of copies have been downloaded. This is science-fiction at its best - future engineering, intrigue, first contact....It’s a space opera like none you’ve experienced before. The audiobooks will keep you listening late into the night - you won't be able to stop!

Building a spaceship that uses Nicola Tesla's revolutionary space drive is only the beginning. From a new industrial revolution to the brink of global war, restless humanity presses onward, eventually to the first contact with an alien species.

There will be changes...if we survive.

New Frontiers, Inc, is leading the drive to conquer space. Overcoming opposition from powerful and jealous nations is only the beginning. What of the alien society that left those mysterious beacons in the asteroid belt? They’re still here, and they’re not happy....

Much more action, skullduggery, etc. Plenty of new tech, lots of spying, and back door deals. We may be on the eve of WWIII.

World War III is about to break out. As if that wasn’t dangerous enough, the enigmatic extraterrestrials called the Flickers have returned with a warning: do not venture beyond the moon. Faced with the ultimate threat, can humanity put aside their differences and unite to face the common danger?