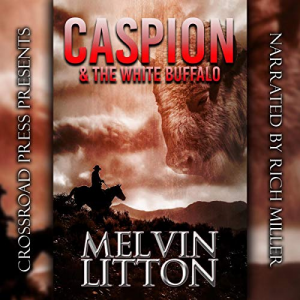 Based on a true event, Caspion takes you on a singular quest, both heroic and tragic, through the great buffalo hunt and the vanquishing of the Plains Indians (1871-1876).

Riding the crest of the bloody tide is Jim Caspion, a Civil War veteran turned buffalo hunter, a man of notable conscience and courage, ever haunted by the war, yet fleeing settlement and routine, forswearing the practicable for the exotic, the forbidden, and the extreme.

From the opening when he rides into a buffalo stampede to escape a band of Cheyenne, to the very end, his fate is inexorably tied to the white buffalo he spies in his harrowing flight.

Thereafter, its spiritual aspect exerts a growing influence over his own wry, sensual nature, altering his outlook, determining his path. When he meets Moneva, a Cheyenne outcast, their love saga marks another verse in the enduring myth of the West that still shapes and sustains us.