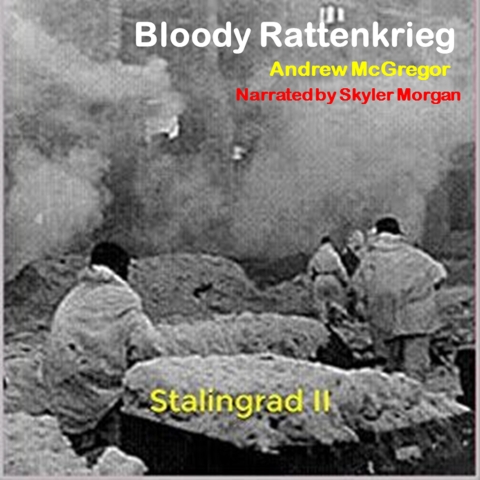 Leutnant Hausser returns as the young squad leader with a past shrouded in mystery. A black Iron Cross hanging uncomfortably around his neck, concealed from all but the closest to him.

The Red Army closes the net around Stalingrad near Kalach, surrounding one of the most formidable armies on the planet, the German Sixth Army. One of the Wehrmacht's finest and strongest fighting units.

Inside the freezing encircled city, the young officer’s squad knows they are now a long way from home, the thoughts of seeing loved ones shattered, they stubbornly fight on. The lingering and sickly thought that the desperate conflict will continue without respite or mercy plagues their morale and resolve. That their situation may get a lot worse.

The story continues following a small group of soldiers as they attempt to continue day to day in the most brutal and desperate of situations. The hope of rescue or potential victory is sustained only by camaraderie and the determination to survive.

As the German High Command desperately tries to re-establish the initiative and plan a relief effort to the beleaguered city, the army inside Stalingrad is ordered to stand firm on the banks of the freezing Volga River.

The German Air Force, the Luftwaffe, mistakenly commit to supplying the city from the air, failing to realistically consider the distance, roaming Russian fighters, ground to air fire and the extreme temperatures.

As temperatures plummet and ammunition becomes rationed, the food and combustible material begin to run out forcing the desperate defenders to continue fighting in the most miserable and chilling conditions imaginable to man.

With temperatures dropping to between minus 25 and 40 degrees Celsius, survival against a Red Army hell-bent on revenge and the Sixth Army's destruction will continue as the men face a sustained challenge of survival on a day to day basis.

Across the frozen Russian Front from the suburbs of Leningrad in the north to the southern banks of the Black Sea in the Caucasus Mountains, two facts are now emerging.......this merciless war will now not be over by Christmas, and the myth of German military invincibility had been cracked, if not finally shattered on the banks of the Volga.

Having spent thirty years studying World War 2 and in particular, the Russian Front, Bloody Rattenkrieg is based on historical fact. The characters are fictitious, attempting to portray a realistic account of what the battle would have been like for individual soldiers. All units and actions are in accordance with actual events, including propaganda, deployment and individual division engagements.

Bloody Rattenkrieg is the sequel to 'Bloody Iced Bullet', the opening work in the series. Both books are now available in US bookstores, in electronic format and paperback from Kindle across the world.

The author aims to provide a thoroughly enjoyable and imaginative reading experience at an affordable price for the reader. All three works from the author's World War 2 Series concentrating on Stalingrad have achieved Best Seller status on Amazon in the UK and many more stories are outlined.