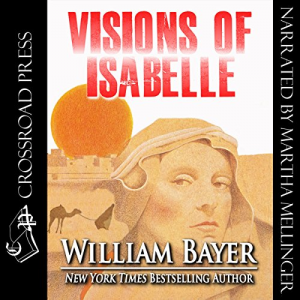 In 1903, a tall woman with flashing Tartar eyes was the talk of military circles, newspaper offices, and salons. Her name was Isabelle Eberhardt, and the life she actually led made her justifiably the object of the most scandalous gossip in Paris as well as in North Africa. This compelling novel, a fictionalized biography, tells her story - the story of a brave, self-destructive and sensual being with an irrepressible rage to live.

Isabelle came to Tunis when she was 17, longing for fame as an author and discovering that her life could be the inspiration for her art. She converted to Islam and dressed as a man chiefly because it allowed her to wander freely and taste the delicacies of a forbidden existence. Her brief life encompassed an enormous range of experience. She joined a mystic religious sect and was nearly assassinated because of it, went to trial over the scandal and was forced to leave the country. She followed the French army into the Sahara as a journalist, insulted the great and the famous, spent sleepless nights in rapturous mystical prayer. When she died, at the age of 27, she was reputed to have slept with most of the Foreign Legion.

Isabelle's goal was to rediscover herself through her excesses, her fears and her joys, so that perhaps one day she might rend the veil which hid from her the secrets of eternity. This fascinating novel about her life proves admirably that the best of Isabelle Eberhardt lay in her energy and determination to dive into the midst of maelstrom and ride out the fury of her existence.

"A fascinating, strangely haunting story of a woman buried in history - a sort of female Lawrence of Arabia who shocked her own times and might still shock ours but is a new kind of heroine our history can now produce and accept." (Betty Friedan)
"Isabelle Eberhardt was undoubtedly a romantic, and William Bayer's novel is a romanticization - a 'fantasy' he calls it - following fairly closely what is known about her. Bayer has a fine eye and ear, and it is hard to fault his feeling for the time and the country. His style has an appropriate verve. He obviously feels for his subject." ( San Francisco Review of Books)