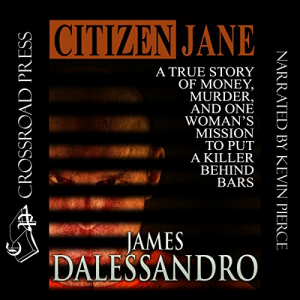 The true story of Jane Alexander, who spent 13 years tracking down and putting away the man who murdered her 88-year old aunt, and then went on to help solve 20 murders, igniting a national victim's rights movement.

Jane Alexander had it all: a wonderful family, a beautiful home on three acres just north of San Francisco, and a deep romance with Tom O'Donnell. A family friend for 25 years prior to their romance, Tom helped Jane cope with the death of her husband and captivated her with his charming, unflappable personality. But Jane's picturesque life came crashing down the morning that her beloved aunt was savagely murdered. Slowly, astonishingly, the evidence began to point to the last person Jane would ever believe capable of such an act: Tom O'Donnell. She soon discovered that he had fled with thousands of dollars of her money, forcing her to sell her possessions and move into a dilapidated old house. Jane would eventually learn that she was his next victim: he had secretly taken out a million dollar life insurance policy on her. With and unresponsive criminal justice system and almost everyone telling her that her quest was futile, Jane devoted her entire life to tracking him down and forcing the system to do its job and get justice for her beloved aunt.

But the story does not stop there: along the way, Jane met dozens of people with similar horror stories: a savagely murdered loved one, a justice system that refused to function. She and Jan Miller, whose daughter was murdered during summer break at Chico State University in a case still unsolved, founded Citizens Against Homicide to fight back for the victim's families. At the time of Jane Alexander's death in 2008, they had helped solve 20 cold case murders, were working on 500 homicide investigations, and had seen their organization spread to all 50 states, with more than 5,000 members.