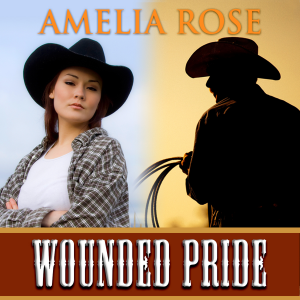 Melinda Brandt is fiercely protective of her brothers, and has been since her mother's death at an early age. In fact, she has built her life and her career as sheriff on her ability to always maintain control. Now, it feels as if even that is slipping away from her. A madman (Charles Sanders) has entered her family's lives, causing her brothers to flee and leaving her all alone. Now an outside agency is moving in to take the case away from her, and she cannot bear to let it go. In a desperate attempt to regain control, Melinda goes outside of the law and leaves town with Charles' step-brother (Cale Winters) to track him down and bring him to her own brand of justice. On the road, she finds her primal self responding to Cale's presence, but how can she dare to let her guard down with so much on the line?

When Cale first met Stanhope's sheriff, Melinda Brandt, it had not been under the best of circumstances, but he had felt an immediate attraction to this brunette tour de force. He had been forced to table his attraction, however as he had only come to the small Oklahoma town because his step-brother Charles had been arrested and he had promised his mom that he would act as his attorney. Cale has always felt responsible for Charles, but when he escapes and goes on the run after attacking members of Melinda's family, Cale knows he can no longer sit idly by. Pairing up with Melinda, the two strike out on the road to hunt down his brother. The longer they spend together, the more Cale begins to see through her tough exterior, but the closer he gets, the more she shuts him out. Will he be able to withstand the fire long enough to remain unbranded by her intensity or will her wild spirit remain untamed? When lives are on the line, can he choose this woman over the man who was raised as his brother?