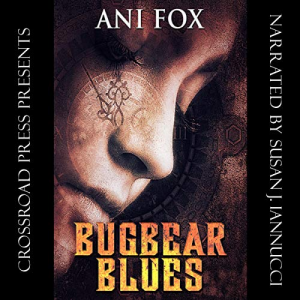 The street has its own uses for magic, and no mercy.

When immortals start meddling with a century-old murder mystery, the King of the Eternal City summons Delphi Janjack: fixer, tour guide, gentleman’s gentleman...a one-person army meant to solve problems without mussing his top hat and brocaded vest. Delphi might also be a disgraced champion in hiding, his secrets so abhorrent nothing but death will wipe the slate clean. Nearly 400 years after the Elves invaded South America, there is just one free city left: Austen, Tejas. With the heir to Court Royale missing, the last bastion of human independence faces inevitable destruction.

Delphi has mere days to find the missing Queen, solve the murder, and administer rare justice to the incorrigible Grey Elves. Can humanity afford to trust this monster? Does it have any other choice?

Equal parts murder mystery, revenge tale, travel guide, and cultural history, Bugbear Blues takes listeners to a world that witnessed Jane Austen survive tuberculosis in 1817, then alter the landscape of the multiverse. From jazz wizards to magical computers, enter a bizarrely familiar 1980s Texas where the Darcy clan has taken up the way of the sword and literature itself can be fashioned into a weapon of inestimable power.