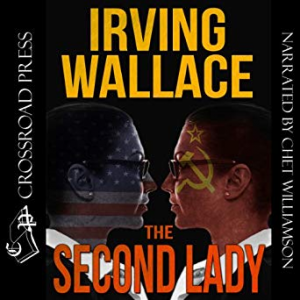 On a state visit to Moscow, Billie Bradford, the beautiful and brilliant wife of the President of the United States, is abducted by the Soviets and replaced by Vera Vazilova, a superbly trained Russian undercover agent and actress who is the First Lady's physical double.

The impostor's mission - to induce the President to reveal a U.S. secret that will drastically tip the world balance toward Russia. But one false move - whether before TV cameras or in the White House bedroom - can destroy the entire masquerade.

And in Moscow, Billie also has a mission - to frantically seek ways to escape while daringly leading a Soviet intelligence officer astray about the most intimate area of her married life.

Two women, each playing a treacherous game in a foreign land, each taking a desperate gamble in the arms of the other's lover--a world-shaking gamble that only one of them can win...

Praise for The Second Lady

Special Bonus - An Excerpt from the novel Desire, by Amy Wallace, is included at the end of the audiobook!

Publisher's note: If you have not discovered the fiction of Irving Wallace, you are in for a treat. Starting with his controversial best-seller The Chapman Report (which was feautured in Stephen King's new thriller, 11/22/63, and continuing on through The Man - a novel in which a black senator became president in the turbulent 1960s (for which Wallace's family received threats while the movie - featuring James Earl Jones - was in production), as well as The Prize, The Miracle, and many others, Wallace provided fast-paced, intricately researched thrillers on pace with the world around him. Charged with intrigue, sex, and wonderfully complex plots, Wallace sold literally millions of copies of his novels worldwide. It is our pleasure at Crossroad Press to bring them back, one by one, in digital. It has also our privilege to work with Wallace's daughter, Amy, an accomplished author in her own right. Amy passed on unexpectedly and far too young in 2013. We have brought back Amy's critically acclaimed novel Desire - in both digital and audio, as well as her biography of James Sidis - The Prodigy. Just search Irving Wallace, Amy Wallace, or Crossroad Press for our growing catalog of their work.