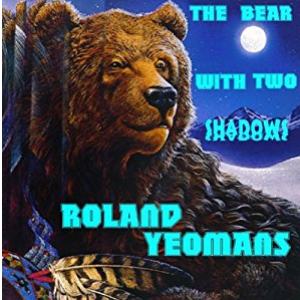 The Bear with Two Shadows

In a land just beyond your mirror lies a realm few discover. It is a magical, dangerous dimension. There lurks your darkest nightmares and your fondest hopes. For nearly two thousand winters there, the seasons have flowed inevitably one into another. Life is as it always has been. The Huron war with the Iroquois, the Commanche with the Lakota, and the Apache with everyone. Across the great waters, the Mongul storm the great wall of Chin. The samurai of Nippon invade Indus. And the vast Coliseum lies in ruins, overgrown with vines and olive trees. The deer and bear roam the deserted villages of Gaul. And the lonely wind whispers through the towering monoliths of Stonehenge. The race called Whyte is not even a memory. Except to Estanatlehi, The Turquoise Woman, once named Gaia, Goddess of the Earth, by the People she alone remembers.

All of which means exactly nothing to the young bear Hibbs. For as long as he can remember, he has been raised by The Turquoise Woman, whom he simply calls GrandMother. Trained by her, hunted by the Lakota, accompanied by the strange hawk, Little Brother, Hibbs has happily ambled from mountain to desert to forest, even sometimes across the great waters. Often he has asked GrandMother why she has led him to so many different lands. The answer has always been: Because a moving target is harder to hit.

He thinks it is a joke. It is not. He is hunted by more than the Lakota. He is being hunted by a being now known as the Gray Bear, though that has not always been his name. Hibbs is the unknowing key to rescuing the race once called Whyte from oblivion. For that very purpose the Turquoise Woman has raised and trained him. But now she repents of her actions. She has grown to love the young bear. And for the Whyte race to live, Hibbs must die. So she has hidden him in the ancient land of Eire, home of all manner of strange beasts and wonders, ruled by the stag-being Cernunnos. Here she hopes she can cause Hibbs to be lost among so many fearsome creatures.

It is a vain hope. Hibbs, large of heart, bold of spirit, cannot see pain without trying to help. He has become a healer. And heal he will do no matter how much Cernunnos protests. And protest the tyrant does - with his vast army of Darklings. To survive, Hibbs and Little Brother must escape, using a mysterious construct called a Sidhe Mound. Estanatlehi sees her plan to save Hibbs further unravel as the bear and hawk find themselves in Avalon, now being bloodied by an eon-long civil war.

There, in the crystal and gold palace of Caer Wydr, Hibbs interrupts the dark ritual, Diatheke, setting the race called Whyte a step closer to their destiny and himself into a desperate struggle of spirit with the Gray Bear.