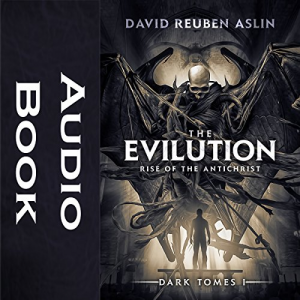 The Evilution: Rise of the Antichrist

Masquerading as the powerful Vatican Bishop, Cardinal David Xzytun, ultimate "Evil" has incarnated with intent to control, as puppet master, a Caesar for his new Roman Empire.

Standing tenuously on the side of hope amidst the encroaching apocalyptic doom is Dr. Paul Bradfield, a man conflicted between rational science and matters of faith regarding unexplained supernatural occurrences, and the horrifying deaths of several of his closest friends.

Only Jennifer Dowling, Bradfield’s true love, and Matt Larsen, his slovenly yet brilliant friend, recognize the unholy phenomenon which has fixated on, or perhaps emanates from, Father Joseph, Bradfield’s dearest friend of all.

What will come of humanity when the clock counts down? Can one man make the difference and stave off mankind's ultimate doom, at least for the time being?

All roads appear to lead to one inexorable horrific beginning of the end...that is...The Evilution.