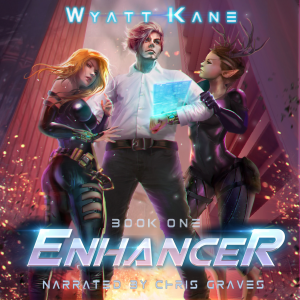 Ty Wilcox doesn’t really believe in superheroes. Then one is murdered right in front of him.

Ty is just a normal guy trying to do his best. He’s single, stuck in a dead-end job with the most hateful boss in the universe, and struggling under a mountain of debt. When he witnesses an impossible battle between two superpowered people, every instinct he has tells him to run. Instead, he becomes the owner of a device that can change his life in ways he can barely imagine. All he has to do is survive for long enough to learn how to use it.

Warning and minor spoilers: Enhancer is a book intended for mature listeners ages 18 years and older. It describes sex, violence, and nudity. It includes light gamelit elements, occasional bad language, and is set in a cyberpunk alternate future. Within its pages, you will find attempted murders, actual murder, home invasions, kidnapping, fights, betrayals, destruction of property, random deaths that can be considered self-defense, a really malevolent boss who treats Ty very badly, and a monstrous bad guy who treats him even worse. Most importantly, you will find gorgeous superheroes and beastkin beauties who are comfortable with unconventional, polyamorous, harem relationships, and there are waffles on offer, as well.