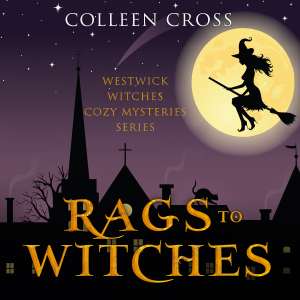 Cendrine West can't catch a break. She's close to landing a new job, and things are getting cozy with sexy sheriff Tyler Gates. All that changes when she is kidnapped by renegade witch Aunt Pearl, who is hell-bent on avenging a friend's untimely death. It's Las Vegas or bust...for all the wrong reasons.

Rocco Racatelli is a hunky Vegas kingpin - and the next mob target. Lady Luck has dealt him a losing hand and he wants revenge. When Aunt Pearl is a little too eager to help, project Vegas Vendetta quickly escalates into an all-out mob turf war. As the witches are thrust into Sin City's seamy underworld, bodies pile up and secrets are exposed.

It's not just the Las Vegas heat that's scorching...Rocco is intent on winning Cen's heart. But she only wants the man she left behind in Westwick Corners. All she has to do is solve a murder, out-magic her ornery aunt, and take down the Las Vegas mafia. What could possibly go wrong?

When organized crime meets unorganized magic, anything can happen! As the body count climbs, it's clear that Cen needs more than a miracle in the desert to set things right.