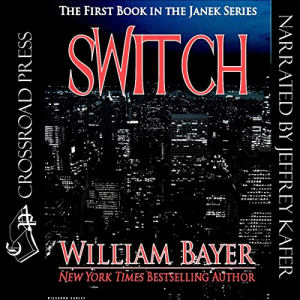 At first the two killings seem unrelated. The lonely call girl murdered on New York City's West Side had never met the prim schoolteacher slain across town in the far safer preserve of the city's Upper East Side. But someone has decapitated them both and switched their heads: a deed that is apparently its own motive, a crime as pointless as it was perfectly executed.

Detective Frank Janek immediately knows that he has entered the realm of a lethal madness. Middle-aged, divorced, a man centered solely on his work, Janek is practiced in piercing the minds of the criminals he pursues. In the absence of clues from the killer, he has only the awful symmetry of the crime to work with, only his own finely honed intuition. "This was a crime conceived in the shadows," he thinks, "There was precision in it, and passion. Concentrated rage and a love of order. A need to beautify. Even some strange, unfathomable, as yet uncatalogued species of love."

The challenge-to become as precise, as creative, as cold as his prey-begins to take its toll. The tenuous psychological thread leads Janek back into the unsettled past-- not only the killer's but his own. His own passion and rage and unresolved love. The love he bore for the man who trained him-a retired cop whose apparent suicide he has shied from investigating too closely, the passion for justice that has made him a marked man within the police fraternity. The rage he feels at ancient crimes that have finally burst into full and terrifying flower. And most of all, the new love he feels for the mysterious woman in whom all these strands of the past seem to converge. It is Janek's love for Caroline that leads him at last to a blinding vision of the purpose behind the grisly double homicide.

Too late, he realizes that the case of "Switched Heads" may only be the bait....