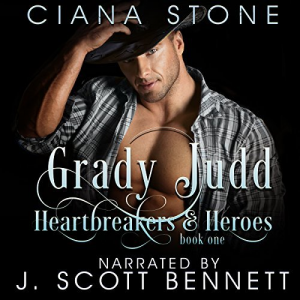 If there was such a thing as an urban legend in Cotton Creek, it was Grady Judd. He'd broken the heart of every woman he'd ever kissed, and he'd kissed a plenty. Many tried to rope him, tie him down, and drag him to the altar, but Grady wasn't the marrying kind. In fact, no one was quite sure what kind of man Grady was. He showed up now and again, tended to his ranch, and then would disappear just as fast and never utter a word as to where he'd been when he came home again.

He was a sexy temptation, rolled up in a fine male package, and was all too willing to deliver a night of pleasure. He was also completely unwilling to let anyone inside his impenetrable wall. It was all fun and games or nothing at all.

Until he showed back up in Cotton Creek this time to discover that he's not the only heart breaker in town, which leads to a whole new game and an entirely new question. Could Grady Judd finally have met his match?