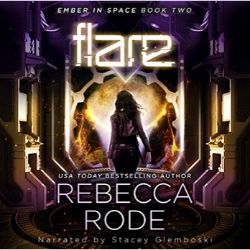 The Empire has taken everything from Ember. It’s time for payback.

Ember doesn’t have time to mourn. She’s got big plans—save the oppressed flickers, rescue Stefan, and bring the Empire to its knees. But she soon discovers that her ability has a terrible, unthinkable cost. Can Ember choose between the man she loves and the Empire she hates?

Stefan has succeeded in helping Ember escape. His grandmother’s prophecy is being fulfilled and he’s ready to face execution for his part in it. But when he uncovers the Union’s deadly secret, Stefan realizes he must survive long enough to find the Union’s base and warn Ember— before she pays with her life.

In this space opera sequel to Flicker, the stakes are higher than ever. Fans of dystopian and sci-fi romance will enjoy this action-packed science fiction adventure series by a USA Today and Wall Street Journal bestselling author.