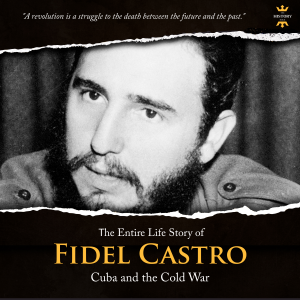 FIDEL CASTRO: One Of The Most Prominent Communist Leaders

Fidel Castro ruled the country of Cuba for almost 60 years, and he changed the political structure of the country to a one-party socialist state. He ruled firstly as a Prime Minister before converting it to the title of President and Commander-in-Chief of Cuba. Castro’s political journey started on a rebellious note as he participated in the revolt against right-wing administrations in Colombia and the Dominican Republic. He later rose to become the leader of the communist revolution.

The unveiling of a hero
A long road to political recognition
The mystery that is Cuba and the enigma that is Castro
Leadership and resilience panache to success
From a rogue nation to a peacekeeper
The revolution and Cuban’s life under Castro
1953 insurrection and the vital lessons
And much more!
This audiobook is a biography of the great leader Castro. In this audiobook, we would highlight his strengths, weaknesses, mistakes, and other attributes of interest. I hope you find this audiobook interesting and inspiring enough to awaken the giant in you to achieve greatness.