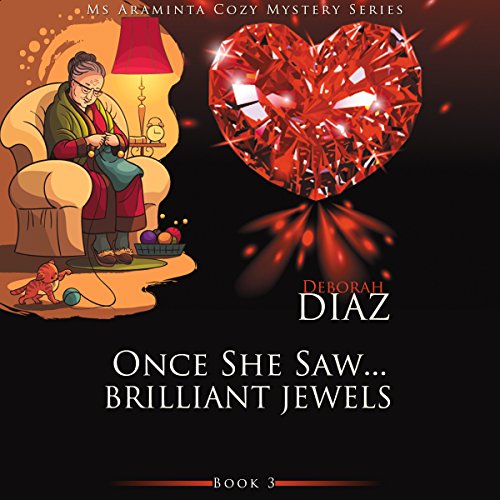 Once She Saw Brilliant Jewels

Araminta Elmore is a 67-year-old retired insurance adjustor. She is helpful and always finds herself in the middle of a police investigation.

She has been invited to a piano recital at the Belle Meade home of Arthur and Beatrice Lyons. As she makes her way to the French doors of the drawing room, Araminta suddenly notices a glint in the grass. When she picks this up, it turns out to be a red stone - a real ruby. She shoves it into her bag until after the recital.

Aleta Lyons, who is giving the recital and hoping some of the influential guests will get her a music scholarship, plays half the program before Arthur realizes his wife is missing. At the intermission, he gathers Aleta's tutor, Adrian Byers, and his roommate, Nigel Gates, to search for Bea. It is he himself who finds Bea; however, her body is floating in the ornamental pond at the back of the house. She is wearing her heirloom diamond earrings, but not the necklace Arthur had seen her put on.

How is the red diamond found by Ms. Araminta links to the death?

What will happen next?