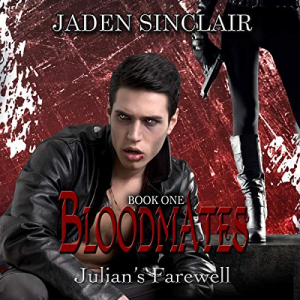 Noble born, Julian Marino turned his back on the only life he has ever known to search for a lost friend he has always cared about and never forgotten. Groomed to take his place as an Elder, his father's ambitions, not his own, Julian set out to reinvent himself. Learning to fight, to hunt, to track has been very successful for him, but not in his many quests to find his best friend. Feeling defeated, Julian goes to the one and only home he still has left and discovers new problems within his race as well as a new war brewing.

Serina Ferrari was born a bloodmate. She is destined to be mated with a vampire and will suffer greatly if not. Her system isn’t designed for a human life. Her body functions only for a vampire, and without enough nutrition as well as feedings from a vampire, she will die. Her father refuses to accept this fate. He thinks he can cure her and is blind to the suffering she goes through. He takes vampires and even Elders with the hope of finding the cure needed for his daughter. He has no care about how many lives he takes, either, or how they die. He only wants to save his daughter and kill as many vampires as he can.

But when he ends up taking Julian, all bets are off, and the war that had been brewing starts. Not to mention there’s a guardian tagging along right behind Julian - a legendary protector to the vampire race who is very deadly when crossed.

Now, the battle is on, but who comes out a victor or a victim?