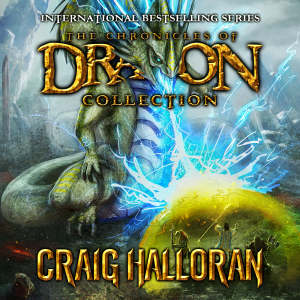 The Chronicles of Dragon Collection: Books 1-10

Evil beware. The son of the Dragon King doesn’t check his temper at the door.

The impulsive youth Nath Dragon knows what he must do to earn his scales. Still trapped in human form, he hunts down the dragon poachers - who are killing and enslaving his kin - with a vengeance. Accompanied by a dwarf named Brenwar Bolderguild, the brazen warriors clash against the world full of orcs, elves, ogres, trolls, goblins, and men in order to save his brethren.

But unforeseen dangers lurk in the shadows. The sinister scheme of High Priestess Selene and her dragon master, Gorn Grattack, threaten all of dragonkind. And in a moment of violent fury, Nath is cursed for all time.

Now, Nath - armed with the magical sword called Fang - sets out on a perilous path toward redemption. At its end, the ultimate battle awaits him, when he must confront the powerful evil lurking within and the wicked dragon army sworn to defeat him. And if Nath does not prevail, the fate of dragonkind is doomed.

If you love dragons of all sorts and sizes, young heroes with godlike powers in the Percy Jackson series, then you can’t miss with this fast-paced, action-packed, magic-filled, dangerously addictive fantasy adventure!

Sink your claws into the dragon-sized best-selling Chronicles of Dragon series. All 10 titles in this series are included in this one-of-a-kind ultra-dragon adventure.

More than 50 hours of listening entertainment! This audiobook is a must-have for all dragon lovers worldwide!