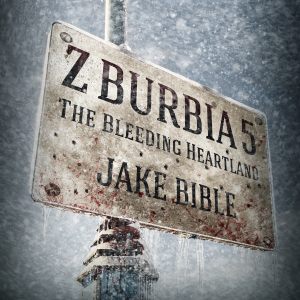 The American Midwest - a bucolic ideal that hasn't quite translated to the zombie apocalypse. Instead of open arms and welcoming faces, there are now open mouths and ravenous Zs. The blue collar drive to work hard is now a red-mouthed hunger for flesh. Jace Stanford, as well as the remnants of the survivors of Whispering Pines, and the rag tag bunch of private military contractors, laborers, and former (everyone hopes) cannibals now must face the vast, exposed space of America's Heartland in order to get to the possible sanctuary of The Stronghold in the post-apocalyptic ruins of Boulder, Colorado.

Just a simple convoy from point A to point B, right? Yeah, right. Not for these folks. Z-Burbia 5: The Bleeding Heartlands is full of blood, guts, puss, and snark as Jace and company are forced to deal with yet another whacko group of crazy survivors, zombie hordes on a scale they have never seen, and the mystery of who keeps skinning folks and leaving the butchered bodies as some type of bloody warning. Yep, just another fun time in Z-Burbia for the Stanfords!