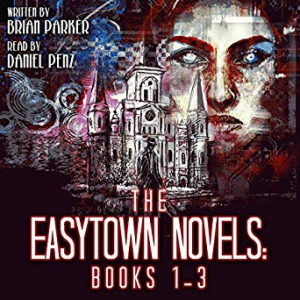 The Easytown Novels create a frighteningly real near future world beset by climate change, social depravity, moral ambiguity, and corporate greed. Easytown is city with a thousand stories and the hard-nosed homicide detective, Zach Forrest, is determined to learn them all.

The futuristic slum in eastern New Orleans is a violent place where any vice can be satisfied - for a price. As long as the taxes are paid and tourists continue to flock to the city, businesses are allowed to operate as they see fit. When a string of grisly murders rocks the city, homicide detective Zach Forrest must hunt down the killer responsible before they strike again.

Book 2 - Tears of a Clone: Torture tourism is an illegal sport in Easytown - unless the victim is a clone, then nobody cares.

When Detective Forrest discovers the mutilated bodies of three clones in a garbage compactor, he’s shocked to learn of the multi-million dollar industry of torture tourism. He embarks on an unauthorized investigation and discovers that the truth behind the clone murders is more terrifying than he’d imagined.

Book 3 - West End Droids & East End Dames: Everything comes crashing down on Forrest when a rampaging cyborg attacks, disrupting his investigation into the death of a lowly thumper club doorman who knew too much. Before he can determine his next move, a beautiful evidence clerk lands on his doorstep and forces her way into his life. Meanwhile, the precinct chief tasks him to track down and stop the street doctors who build the abominations.

But, will doing so cost Zach more than he’d expected?