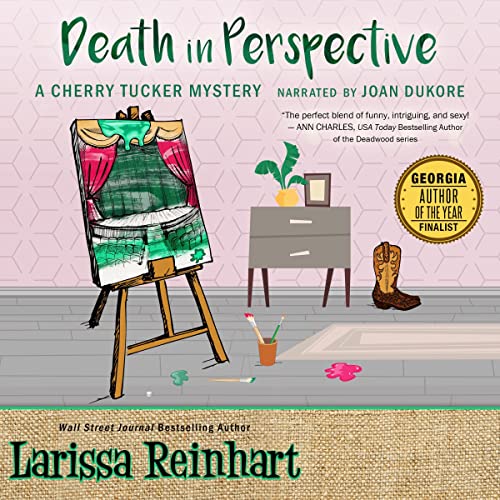 From The Wall Street Journal best-selling author, Larissa Reinhart, this is the fourth in the Cherry Tucker Mystery series, a 2015 finalist medal for Georgia Author of the Year, Best Mystery, and Night Owl Reviews Top Pick.

The curtain rises on Cherry Tucker’s debut as a high school set designer at the posh Peerless Day Academy. Cherry’s been hired for an adaptation of Romeo and Juliet, but the drama director is hoping Cherry can also turn the spotlight on a malicious social media bully who’s sending poisonous texts to the faculty. The director’s got his own drama to hide, and the phantom texter seems eager to spill school secrets. When the principal’s secretary commits suicide, Cherry suspects foul play.

Deputy Luke Harper is ready to return as Cherry’s leading man. He’s eager to assist in finding the phantom culprit, but Cherry fears family secrets offstage may doom them to the role as star-crossed lovers. With the bully waiting for a murderous encore and her own family skeletons to hide, Cherry scrambles to find her brother and the mysterious texter before the phantom decides it’s curtains for Cherry and forces her to take a final bow.