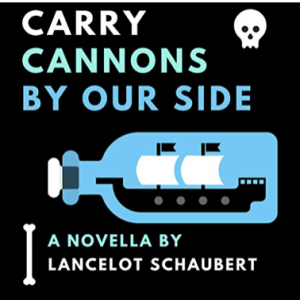 Carry Cannons By Our Sides

A young pirate-in-training shadows his dad as his father chases down the man who stole his cargo. Confronted with cannons, the young pirate fears their tiny 15-man crew will die quickly, but his father shows him a magic more powerful than all the cannon fire in the world. The only problem? It's not iron and cotton the other pirate stole.

“Lance Schaubert writes with conviction but without the cliché and bluster of the propaganda that is so common in this age of blogs and tweets. Here is a real practitioner of the craft who has the patience to pay attention. May his tribe increase!” (Jonathan Wilson Hartgrove, author of Common)