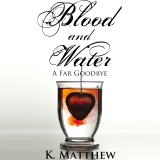 After a failed attempt at feeding Victoria a vegetarian diet, Seth realizes he's bitten off more than he can chew. Gabe is now convinced that the vampire is dangerous, and he's not above going over Seth's head to take care of her. With both of their lives in danger, Seth must figure out what to do with Victoria. Can a werewolf train a vampire, or is she better off with her own kind?

Blood and Water is an exciting paranormal series featuring a sexy werewolf, a curvy vampire, and tons of adventure. It's told from multiple points of view. The layout is very similar to George R. R. Martin's A Song of Ice and Fire (more popularly known as Game of Thrones) where each character is given their own section.

Warning: This fourth and final book in the series contains graphic content of a violent nature. Listener discretion is advised.

Other books include:
First Encounter
Enemies and Friends
Fledgling
A Far Goodbye