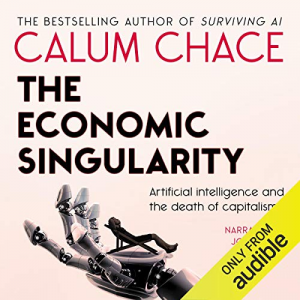 Artificial intelligence (AI) is overtaking our human ability to absorb and process information. Robots are becoming increasingly dexterous, flexible, and safe to be around (except the military ones). AI is our most powerful technology, and you need to understand it.

This new book from best-selling author Calum Chace argues that within a few decades, most humans will not be able to work for money. Self-driving cars will probably be the canary in the coal mine, providing a wake-up call for everyone who isn't yet paying attention. All jobs will be affected, from fast food McJobs to lawyers and journalists. This is the single most important development facing humanity in the first half of the 21st century.

The fashionable belief that universal basic income is the solution is only partly correct. We are probably going to need an entirely new economic system, and we better start planning soon - for the economic singularity!

The outcome can be very good; a world in which machines do all the boring jobs and humans do pretty much what they please. But there are major risks, which we can only avoid by being alert to the possible futures and planning how to avoid the negative ones.