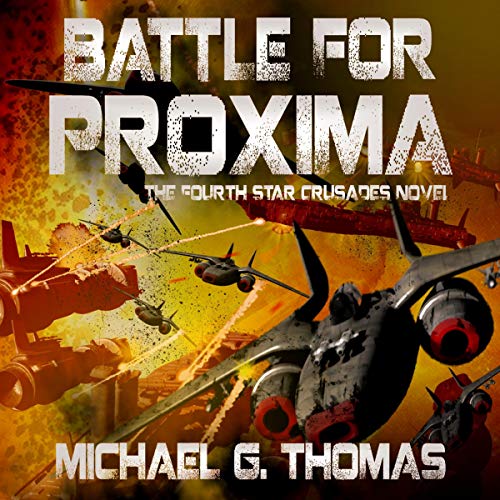 Battle for Proxima is the fourth book in the epic science-fiction series that chronicles humanity’s first interstellar confederation, torn apart by religious strife and extremism.

In this latest book of the Star Crusades Uprising series, the Confederacy is on its knees. Months of war have lost them most of the populated colonies, and more will surely follow. Spartan, now a lieutenant in the Marine Corps, has been given his own special platoon, the Vanguards. Using the best weapons and armor in the Confederate arsenal, his unit is thrown back to the Bone Mill to locate information that could change the war.

After months of battle and many defeats, the fleet and ground forces under the command of Admiral Jarvis assemble for Operation Perdition. Intelligence gathered by the Vanguards confirms the next target. Admiral Jarvis must strike or the Echidna Union will take yet another world. Scores of capital ships and thousands of soldiers and marines ready themselves for their greatest battle yet. The Confederacy needs to turn the war around and drive the Union troops from the lost colonies. With heavy casualties arriving every day, it comes to the newly formed Jötnar battalions to make up the numbers. These powerful but inexperienced warriors must tip the balance in favor of the fragile Confederacy.

Battle for Proxima is a classic work of realistic military science fiction set against the background of the first interstellar human empire.