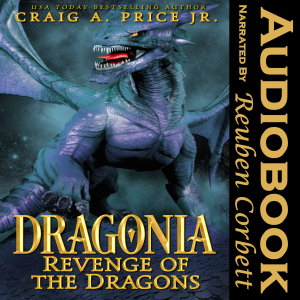 Dragonia: Revenge of the Dragons

The Resistance struggles to find a way to defeat the Dragonia Empire, all hope seems lost against the dragonriders, until they discover an island full of wyverns.

The Dragonia Empire strikes another village. They struggle to find the resistance and exterminate them. One woman won’t stand for it. She unites the villagers, and together they seek the sanctuary of the Resistance. Zaviana is freed from slavery, only to become a slave to a mercenary who wants to protect her. She desperately wants her freedom, and she wants to convince him to help her bring freedom to all of Kaeldroga.

The Dragonia Empire learns where the resistance is hiding, and this time—they’re holding nothing back. The Resistance doesn’t have much time. If they don’t stop the empire this time, it could be the end … for everyone.

Listen to book 2 of this fantastic Dragon Rider and Wyvern Rider series today!