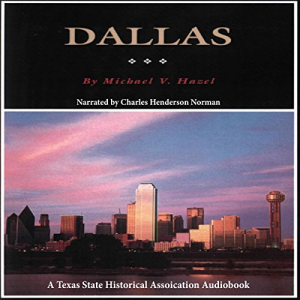 Dallas: A History of

Dallas first grabbed the national imagination in 1936 when it hosted the Texas Centennial Exposition. Since then, the fascination with Big D has seldom flagged. If the assassination of President Kennedy in 1963 cast a pall over the city, the success of the Dallas Cowboys and the popularity of the television series Dallas revived the image of a glitzy, hustling metropolis at the center of the Sunbelt.

In this concise overview, Hazel examines the city's roots as a frontier market town, its development as a regional transportation center, and its growing pains as it entered the 20th century. Ku Klux Klan dominance in the 1920s is chronicled, as well as the half-century of control by an elite group of businessmen. The narrative concludes with a look at today's city, struggling with issues of diversity.

The author pays special attention to the role of ethnic groups in shaping Dallas: the French colonists of the 1850s; the German, Swiss, and Italian immigrants of the 1870s and 1880s; the Mexican Americans of the early-20th century; and the Southeast Asians of recent decades. He also examines the role of African Americans, who came with the first Anglos and struggled for more than a century to gain equality.

Dallas: A History of Big D is based on pioneer letters and reminiscences, as well as the research of recent years. Written in a popular style, it will appeal to scholars and general listeners curious about how Dallas grew to become the nation's eighth largest city.