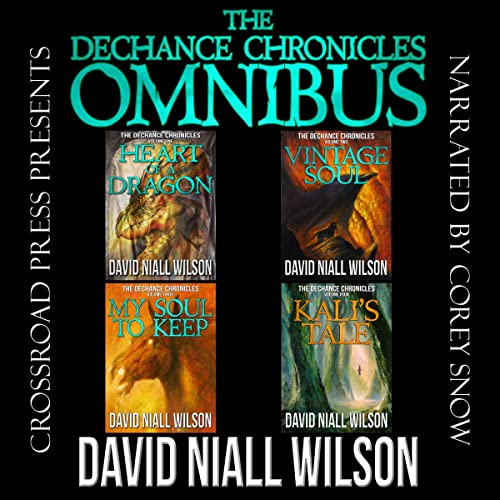 Donovan DeChance is a collector of ancient manuscripts and books, a practicing mage, and a private investigator. This omnibus collection includes books I, II, III, and IV of the series. Included are Heart of a Dragon, Vintage Soul, My Soul to Keep (the origin story of Donovan DeChance), and Kali's Tale - book IV of the series. If you enjoy this book, you should listen to Nevermore: A Novel of Love, Loss & Edgar Allan Poe, which follows on Kali's Tale, has a cameo from Donovan DeChance, and leads into Book V - A Midnight Dreary, also available in unabridged audio.

Heart of a Dragon: When a local houngan begins meddling with powers she may not be able to control, a turf war breaks out between the Dragons motorcycle club and the Los Escorpiones street gang - a war that threatens to open portals between worlds and destroy the city in the process. With his lover, Amethyst, his familiar, Cleo - an Egyptian Mau the size of a small bobcat - the dubious aid of a Mexican sorcerer named Martinez and the budding gifts of a young artist named Salvatore, DeChance begins a race against time, magic, and almost certain death.

Vintage Soul: When, despite the finest in natural and supernatural security, a sexy and well-loved, 300-year-old lady vampire is kidnapped right out from under her lover's nose, Donovan is called in to investigate. There will be no ransom for the kidnap victim, and if Donovan doesn't prevent an ancient, forbidden ritual from reaching its culmination, far more than a single vampire's undead existence will be at stake.

My Soul to Keep: Donovan DeChance is a very private man, and he is in love. When he invites his partner and lover, Amethyst, for a quiet dinner, she has no idea of his true intention. Donovan has planned a sharing - a vision that will give her the keys to his early life - the origins of his power - and a lot more than she bargained for. Join young Donovan as he fights to keep his soul, save a town.