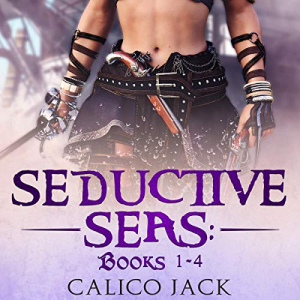 That's the aim of Seductive Seas. Deetz knows his team has built a great game and is ready for the big release of this MMORPG. His boss, the beautiful, steely-eyed Carly, wants a final demonstration of the game's selling points, however - seductive encounters and the combat mechanics.

It isn't long before the head game designer is sucked into the story with the gorgeous, submissive NPC Zetta as he begins a quest to not only convince Carly the Seductive Seas game is ready for launch but finds himself strangely astride two worlds - and drawn to two women who could not be more different.

The Seductive Seas series is a high adventure, fantasy ero romance that has something for everyone - beautiful women, strong personalities, pirates, treasure, role-playing games, steamy encounters between the sheets, virtual reality. And an imperfect, relatable hero who struggles with doing right by multiple women and multiple worlds.

This volume includes the first four installments of the Seductive Seas.