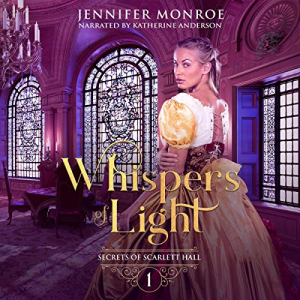 At the age of 21, widow Isabel Barnet has returned to seek refuge in her family’s ancestral home of Scarlett Hall. Having experienced heartbreak and vowing to never love again, Isabel has now resigned herself to minding her younger sisters and forever remaining alone. That is, until one day when her mother makes a request.

Laurence Redbrook, Duke of Ludlow, feels half a man compared to others. The limp he received after a tragic accident is proof of that. Understanding that the ton whispers behind his back - and no woman would ever view him with interest - he remains alone at his estate. That is, until an important letter arrives requesting his aid.

As Isabel and Laurence are joined into a marriage of convenience, Isabel begins to search for a way to escape from both a man she does not love and the secrets in her heart that threaten to destroy her. And Laurence must decide if the love he feels for Isabel is enough for her to see him as the man he wishes to be rather than the burden she is forced to carry.

Whispers of Light is the exciting first book in the new Secret of Scarlett Hall series. Each novel is filled with mystery and secrets that will keep you guessing as you listen to find out if this hero and heroine receive their happily ever after.