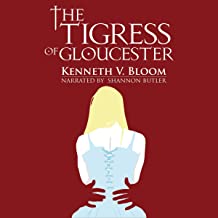 The Tigress of Gloucester

The Tigress of Gloucester, subtitled The End of Loneliness, is an historical romance set in Medieval England in 1075. Four bitterly lonely years have passed since Helena’s cousin fled Wymondham. She accompanied her brother, Lionel, to Norwich Castle two years past. Now none but rebels live in Earl Ralph de Guader’s castle. To remain is to face death or exile, branded as traitors. They attempt to flee. They were not supposed to be caught. That is what Lionel told her. But there her beloved brother lay, beaten and bloody, surrounded by soldiers loyal to the king. They are in the grasp of the big knight. She can’t lose him. He is all she has left, the foundation of her lonely life. King William has plans for Helena and the big knight, plans that will end their loneliness if they are brave enough to face their demons. Life has dealt them emotional blows. But there are surprises in store bringing healing, peace, love, and the end of loneliness.