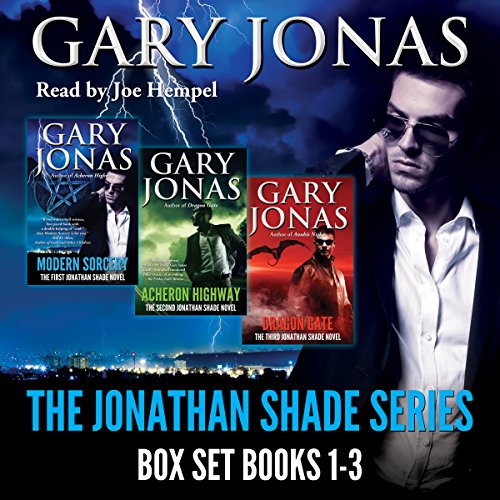 The first three books in the Jonathan Shade series.

As soon as I get over my ex, her father hacks her mother apart with a sword.

She hires me to prove dark magic was involved. Hey, it's what I do as a paranormal investigator, so I get why she thinks I can help.

But my secretary, Esther, a ghost from the 1920s flapper era, and Kelly Chan, my magically engineered protector, are dead-set against me getting involved. With all the deadly magic flying around, they may have a point.

Because the sad truth is, I don't have any magic of my own.

"He stole my heart, Mr. Shade. I want you to find him and steal it back."

Between the crazy dead lady with a necromancer for a stalker, and a lovesick goddess, who wants me to turn over her lover, I'm buried in relationship issues.

Dead people won't leave me alone. Zombies, skeletons, anything that can shamble out of a grave, but are they working for the goddess or the necromancer?

One thing's for sure. There are no safe exits from Acheron Highway.

Stephen Noble, a rich old guy on the board of Dragon Gate Industries is executed by a clan from another dimension. Since I still owe a favor to the company, they hire me to provide executive protection services to the dead guy's grown kids. Graham and Rayna.

Rayna is hot, so that's all right, but Graham is a jerk. And it turns out they stole a dragon from the Marshall Clan and brought it to Boulder, Colorado.

Yeah, you heard me right. I said dragon.

Now Kelly and I are faced with protecting spoiled rich people from a team of assassins and the blood-hungry beasts they brought with them. Those things will kill anything in their path.