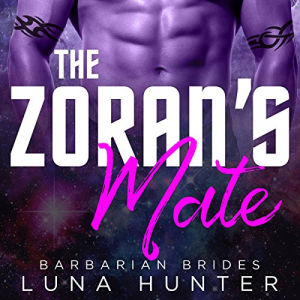 I must have her. And what I want, I take.

When Ava Payne is asked by her best friend Sarah Granger if she'll teach a class in her place, Ava happily agrees. Her best friend is pregnant with a Zoran baby after all, and after narrowly escaping the horrible Nezdek on their previous mission, this should be a welcome change of pace.

Ava quickly regrets that decision when the Nezdek invade Earth, kidnap her, and strip her naked. The awful, pale aliens want to breed Sarah, but they'll settle for Ava.

When their ship is attacked, the aliens dump her on a random, seemingly uninhabited planet and promise to return later. There seems to be no way out for her. But when Ava stumbles into a cave to find shelter, she's in for a big surprise....

Turnon has been living on this world for as long as he can remember, completely alone. The tall alien warrior thinks he's the only one of his species left alive...until a curvy human female wanders into his cave and turns his world upside down.

The barbaric, possessive alien doesn't completely understand his complex feelings for Ava, but he knows one thing for sure: He wants her. And what he wants, he takes.

The Zoran's Mate is the second book in the Barbarian Brides series. It's an instalust, fated mates romance featuring a curvy human woman and an arrogant, headstrong alien caveman who'll do anything to protect his mate. Happily-ever-after guaranteed!