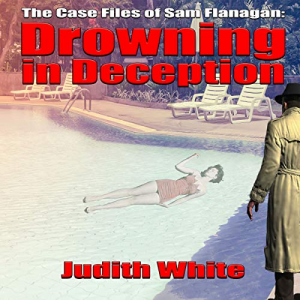 In mid September of 1943, Detroit private detective Sam Flanagan is contacted by the husband of a woman who drowned in their backyard pool six weeks ago. Along with the Detroit Police Department, Wayne County Coroner Fergus Macgregor is calling it “accidental”. And without any real evidence pointing in a different direction, that’s all they can do.

The husband, Victor Girard, just wants to make sure he knows the whole story behind this tragic occurrence. There are troubling thoughts that continue to linger in his mind; for instance, how could she have been so careless? How could Sondra Girard have done the things she did, prior to jumping in that pool for her nightly swim? When Sam delves into the case, he questions the deceased’s state of mind that fateful evening in early August. Was this really accidental, or was the end result intentional on the part of the woman?

Over an almost two week span of investigation, Sam stumbles onto something which is so dark and malevolent, that he finds it difficult to believe that it is happening in his own city.