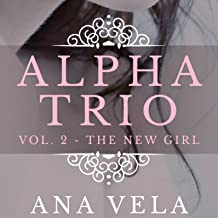 The undisputed captain of the secret Shifter police squad known as The Alpha Trio, Andrei ‘Drei’ Lupei is not used to being ignored.

Everyone, from the new recruits, to his brothers, to the women he beds and forgets, fall in line. Everyone, that is, except the gorgeous, redheaded, and very human bartender at his favorite club.

Cassandra knows more than she should about the Lupei brothers and the shadow world they inhabit. When vampires attack the trio outside the club in an attempt to capture Em’s human Mate, Cassandra is forced to reveal her knowledge... and the secret she’s been hiding for years!

Drei should be worrying about what the vampires have planned and what it means for Shifter kind... but all he can think about is the alluring and mysterious Cassandra. And she knows it.