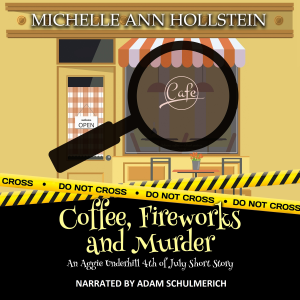 Coffee, Fireworks and Murder; An Aggie Underhill 4th of July

It appears Roger may have a secret love interest. Both Aggie and Betty are curious to learn more about this mysterious person named Pat that has Roger doing things out of his comfort zone, like going to a park to see the fireworks and making dinner reservations for an expensive restaurant. Being that Roger is a notorious cheapskate, and a bit of a snob, Aggie and Betty are dying to get a look at the person responsible for his transformation.

As Aggie and Betty indulge in some snooping, they accidentally stumble over a dead body that helps to solve a mystery. Unfortunately, it’s not the mystery they’d set out to solve. Will they ever learn more about Roger’s significant other?

Join Aggie, Betty, and Roger in this comical and quirky 4th of July mystery to find out.