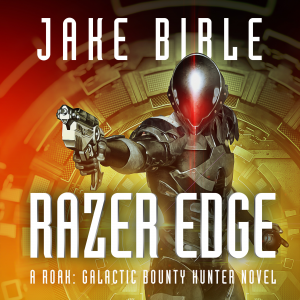 Razer Station is one of the most notorious stations in the galaxy. Criminals, con artists, freaks, rebels, junkies, and smugglers inhabit the space station that floats at the outer edge of civilization.

It's Roak's kind of place.

But, Roak isn't on Razer for a little R&R he's there on a job.

For Roak, it should be an easy job - track down an old tech that has been targeted by several corporations and deliver the tech to the corporations.

Except Razer Station is never that accommodating and Roak's easy job quickly turns into a nightmare battle for survival and a race across the station before it all goes up in flames.

The third chapter in the Roak saga continues with more grit, more grime, and more bodies than ever. Roak is pissed and gunning for anyone and everyone that dares get in his way!