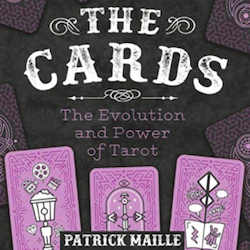 The Cards: The Evolution and Power of Tarot

An extensive history of the development and evolution of Tarot, and its place in culture.

Tarot cards have been around since the Renaissance, and have become increasingly popular in recent years, often due to their prevalence in popular culture. While Tarot means many different things to many different people, the cards somehow strike universal chords that can resonate through popular culture in the contexts of art, television, movies, and even comic books. The symbolism within the cards, and the cards as symbols themselves, make Tarot an excellent de-vice for the media of popular culture, in numerous ways. They make horror movies scarier. They make paintings more provocative. They provide illustrative structure to comics, and can establish the traits of television characters.

The Cards: The Evolution and Power of Tarot begins with an extensive review of the history of Tarot - from its roots as a game, to its supposed connection to ancient Egyptian magic; through its place in secret societies, and to its current use in meditation and psychology. This section ends with an examination of the people who make up today’s tarot community. Then, specific areas of popular culture - art, television, movies, and comics - are each given a chapter in which to survey the use of Tarot.