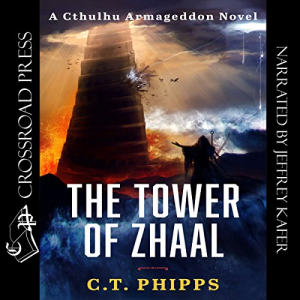 It has been a year since John Henry Booth's exile from New America and the fall of the Black Cathedral. Cursed with a slow transformation into a monster, he has begun a doomed relationship with fellow escapee Mercury Halsey as they seek some way to arrest his transformation.

Dubious hope arrives in the form of the University, the deranged scientists and cultists descended from the staff of Miskatonic University. Except their offer of help comes at a price. Having sold themselves to ancient aliens called the Yith, they wish John and Mercury to join a group of rogues in hunting down a wayward member of their faculty: a man who intends to release the last of the sleeping Great Old Ones on an already ravaged planet. If they're telling the truth, John and Mercury will be heroes. If.

The Tower of Zhaal is the second novel of the Cthulhu Armageddon series, a post-apocalyptic continuation of H.P. Lovecraft's popular Cthulhu Mythos.